Fall is a time of plenty for the outdoor enthusiast. While many pass the days in tree stands waiting for a wily buck to slip up, others wait in fields for fall migrants to pass overhead. Serious walleye anglers are experiencing their best big fish bite of the year over sharp breaks and deep water. Days are devoted to spending quality time with family over a warm bowl of chili while cheering on a favorite team. Families make pilgrimages north to view fall colors or hunt grouse. The fall wish list can get pretty long but for serious panfish aficionados, the fall signals a time of large concentrations of hungry panfish in predictable patterns. Fall brings an opportunity to target some of the largest specimens in a particular body of water. You’ll find that locating and catching bluegills in the fall is not much different than at first ice. 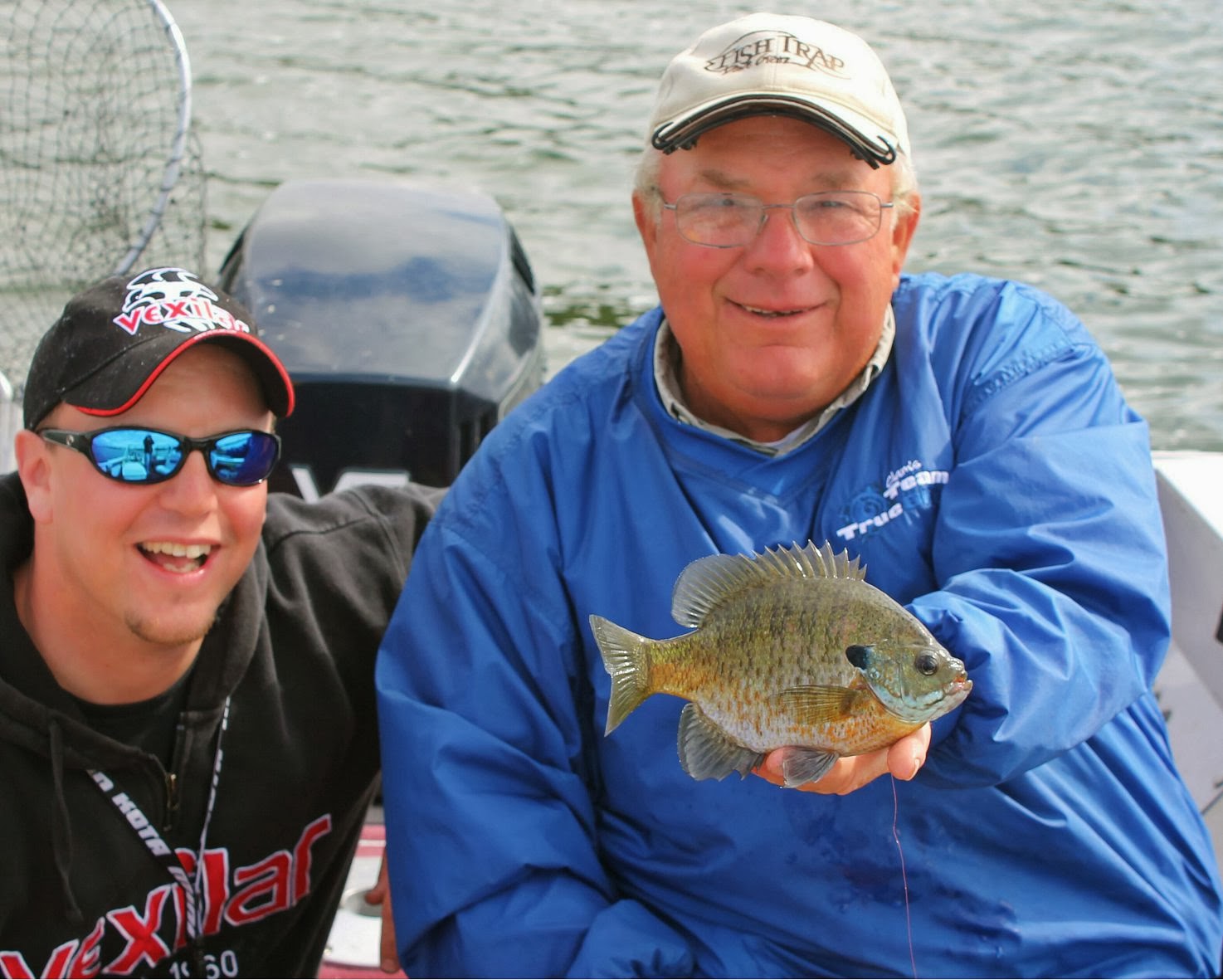 As late summer rolls around and water temperatures get high, big bluegills often evacuate shallow water leaving behind their smaller counterparts. These fish typically stay suspended on the thermocline until fall turnover. Once the water turns over, some of these large fish will return to the weeds while others stay suspended over deep water. Here they generally stay together in small schools of 10-20 fish. These sight feeders are always moving and grazing on anything that catches their eye. Bluegill’s food sources include such things as algae, aquatic vegetation, zooplankton, insect larvae, insects, fish eggs and occasionally minnows. In the fall, packing on pounds for leaner times becomes a priority. Some studies show fish eating up to 35% of their body weight weekly. As water temperatures begin to drop, fish tend to stay more active during daytime hours, not limiting anglers to first and last light. 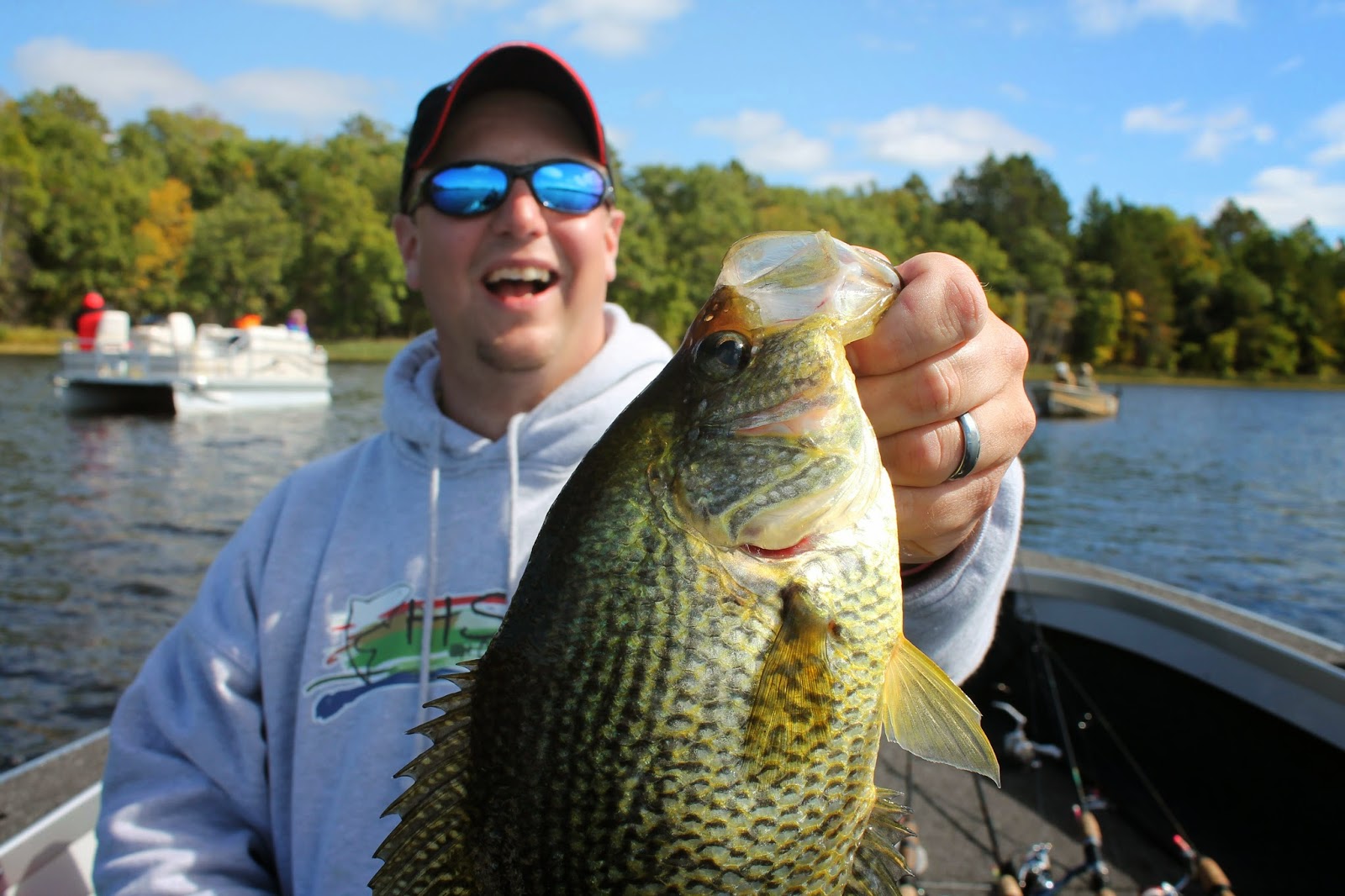 I recently had the opportunity to spend some time on one of my favorite big bluegill haunts, by none other than legendary angler Dave Genz. When I picked him up at the dock, he was armed with his trusted Vexilar FLX-28, a pocket full of euro larvae and an assortment of his favorite ice jigs. As we made our way out into the basin, familiar lines began to show up on our flashers, reminiscent of being on the ice. Dave knew how to interpret these lines very well as it only took moments before he was tussling with his first bluegill.
Genz suggested anchoring in both the front and back of the boat to keep presentations vertical and visible on electronics. Too much boat sway would bring jigs outside the view of our electronics and leave us fishing blind. He showed me a new tungsten jig that will be available later this fall, called the Dropper. The heavy tungsten allowed him to use a small profile jig that stayed vertical and dropped quickly to feeding fish.
“Crappie Sniffer” Peterson, owner of HSM Outdoors, says fall is his favorite time of year to hunt big bluegills. The lakes he fishes around Alexandria, Minnesota, all have very different and distinct patterns. He relies heavily on the use of his electronics while searching out basin areas in close proximity to structure. Once fish are located, the trolling motor is deployed and used to hover over suspended schools of gills. He likes the freedom to be able to move and react quickly. He also advocates keeping log books that include information like date, water temperature, clarity of water and depth which he considers invaluable to patterning and locating fish on new bodies of water. 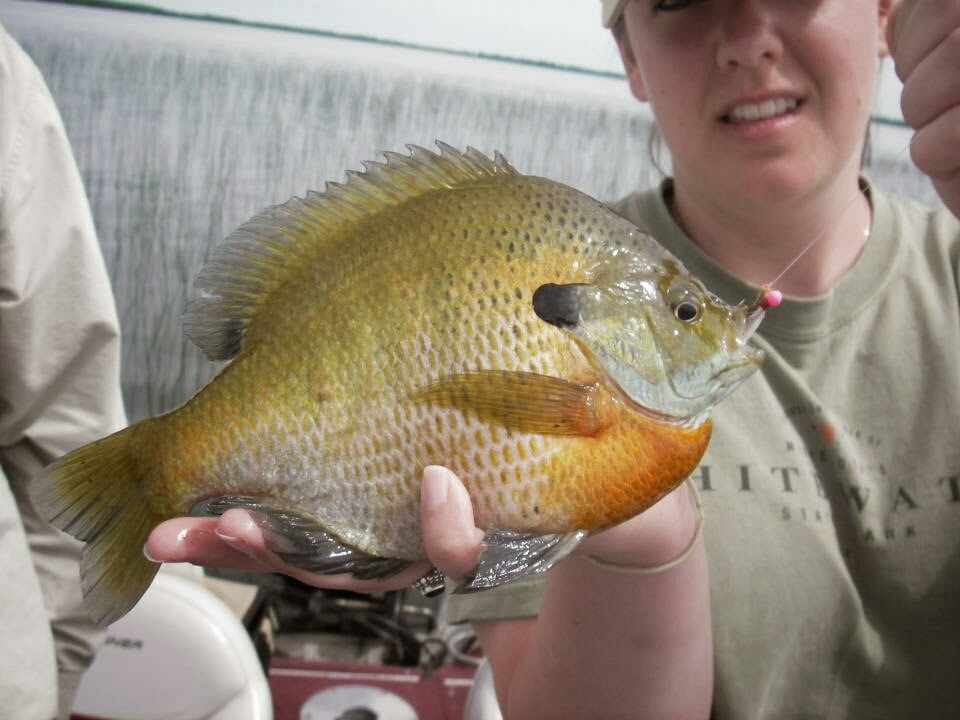 HSM Pro Staffer, Mike Raetz, also professes to catch his largest bluegills during fall, suspended over deep water. Mike often uses his ice rods to jig vertically over the side of the boat. He likes how shorter rods keep his jig inside the cone angle and visible on his Vexilar. “One big split shot, about a foot above my jig, is all I need to maintain depth control,” says Raetz. Mike employs a single anchor off the front of the boat once fish are located. This keeps him swaying and working different fish, picking off the most aggressive ones before moving to his next location. 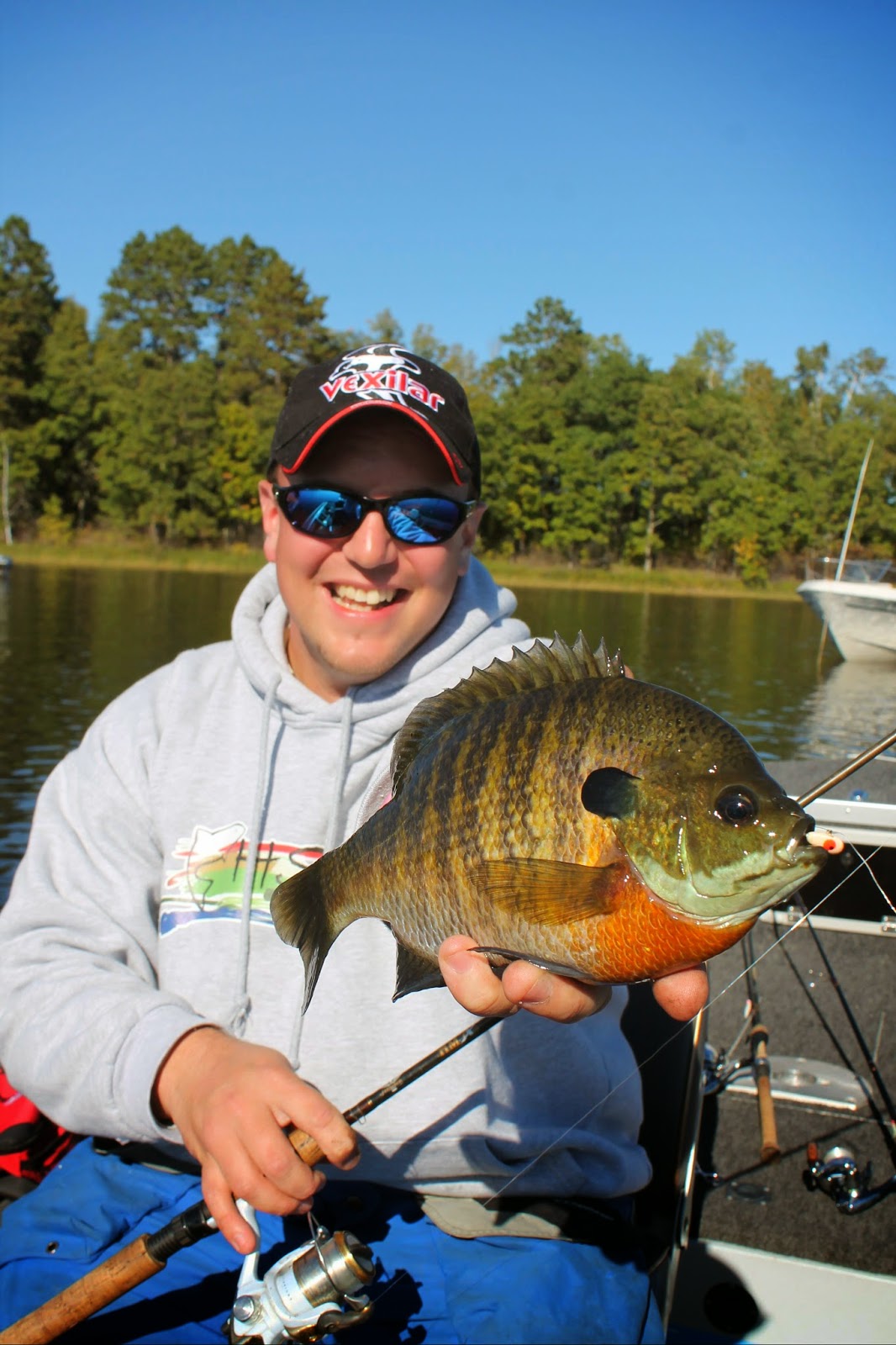 Fall is a busy time indeed with hunting and family but if you do find some spare time don’t forget the often overshadowed bluegills. Finding large concentrations of big bluegills in predictable locations is a great reason to enjoy some of the last open water fishing of the year. Trust me when I say… you’ll be glad you did.

HSM Outdoors is a group of anglers from around the and dedicated to making you more successful in the field and on the water. For more information on fall bluegills visit http://www.hsmoutdoors.com.
Posted by Slab Seeker at 6:01 PM No comments:

Scratching the Panfish Itch
By: Garett Svir
Photography: Kim Svir
It’s finally my favorite time of year, early ice. My auger is tuned up and ready. My new Clam shelter is assembled, and my Vexilar battery is charged. My thoughts have started to drift to what skills I would like to hone this season. The addicting part of ice fishing for me is putting together the puzzle and unlocking the mysteries of the world below the frozen surface. That equals finding fish where others seldom look. According to a recent survey on my Facebook page, an overwhelming amount of anglers say the greatest skill an ice angler can improve on is the art of finding fish. This was seen as a greater skill than jigging style and bite detection. Then why do some anglers congregate over community hot spots, so accepting that the fish are simply not biting? These anglers have yet to be stricken with what we refer to, in my group of friends, as the fish itch. 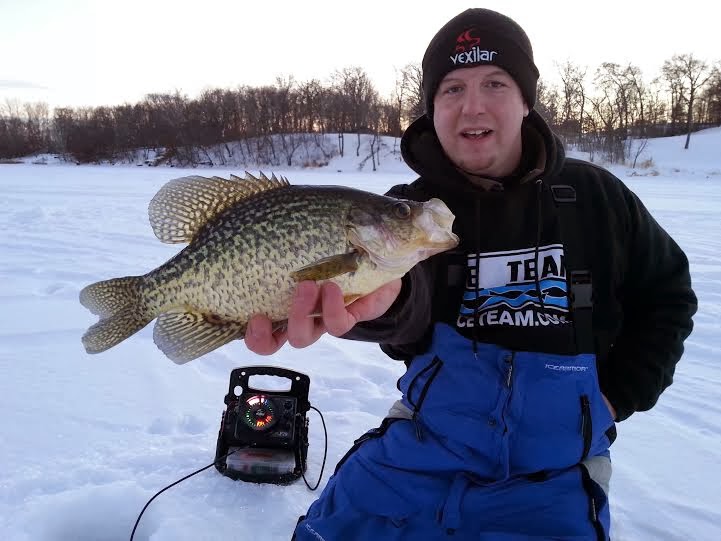 The fish itch is extremely contagious and usually comes on shortly after having success off the beaten path. Far out of sight, anglers with the fish itch, strike out confidently over fresh untapped ice. Symptoms begin as a feeling of persistence that drives you to keep searching until you have located fish. As symptoms eventually progress, you will begin to find larger concentrations of willing biters. Rumor has it that some anglers, who have had the itch for years, will eventually be able to pursue some of the largest specimens in a given lake, known as slabs and bulls. You will begin to recognize anglers with the itch this winter as they move quickly between holes, Vexilar in hand. If you have been stricken, here are some ways that you can scratch the fish itch this season. 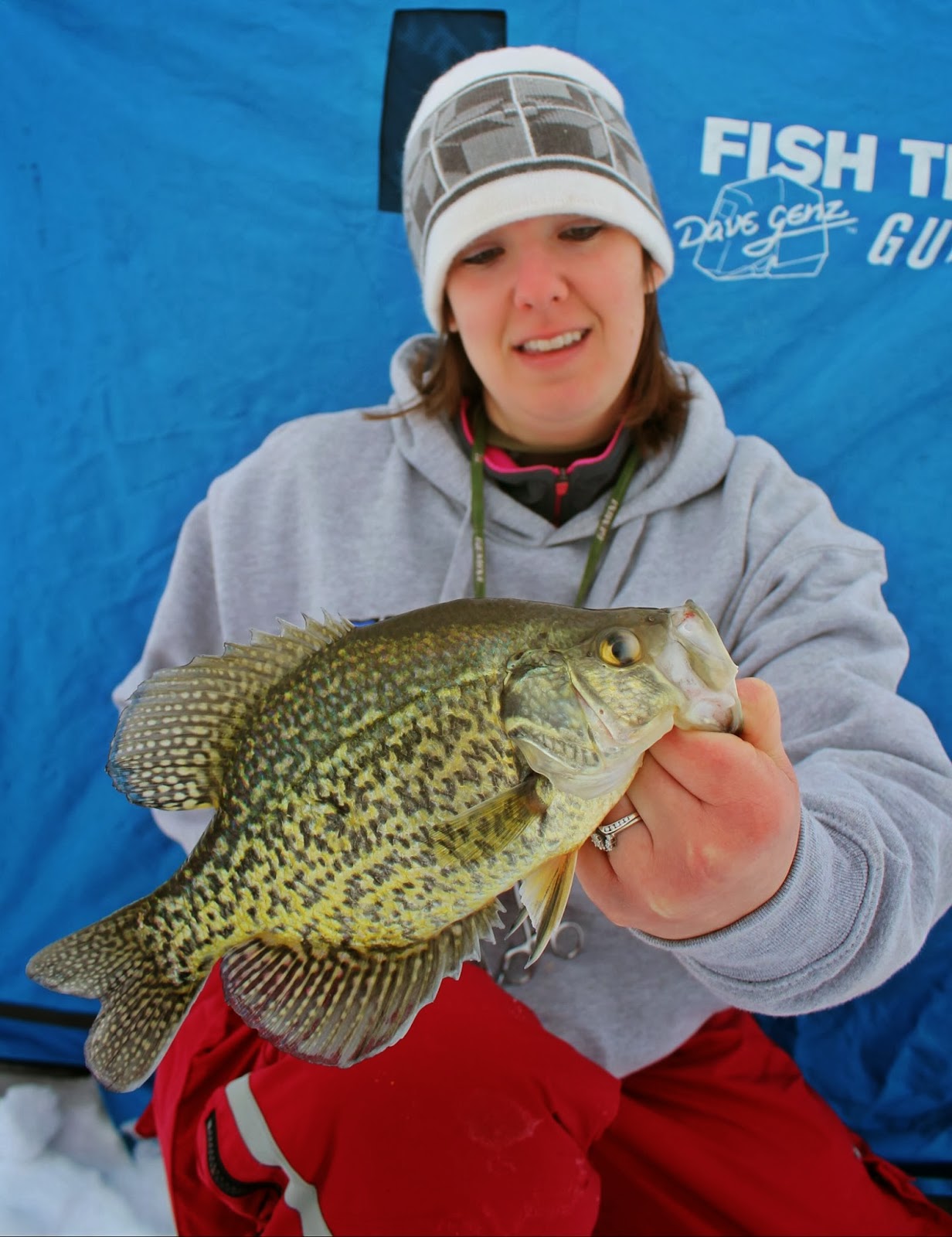 Lessons from the Past
Taking lessons from the past is a huge part of finding fish on your own and gaining confidence away from the community hot spot. When going to a new body of water, try to find areas that have the same characteristics as the areas where you have caught fish in the past. Panfish tend to relate to similar areas on most bodies of water. Learning to identify fish holding characteristics and translating them to different bodies of water will lead to future success. One of my favorite crappie spots is a 20’ depression in the middle of a small shallow bay. When I study a lake map of a new body of water, I always highlight areas that mimic my favorite spot back home.  One tip can be to visualize a contour map in 3D. Looking for fish holding areas on a piece of paper can be difficult. When you begin to see maps in 3D, you will get a feel for how fish relate to a particular spot. You will begin to understand how they find cover from predators, and how they find food. 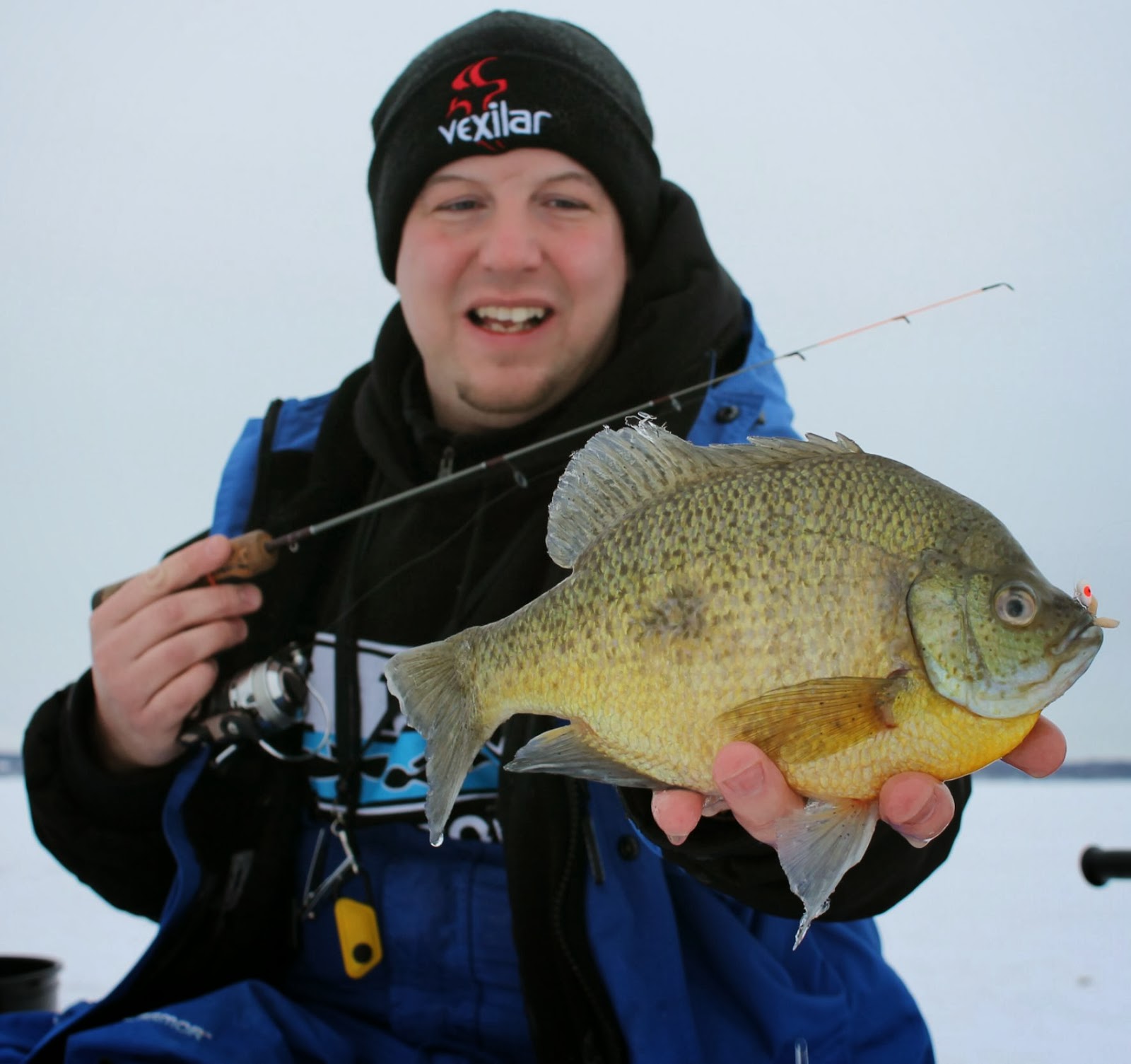 Drive thru Panfish
Drive through the community hot spot. It is always worth seeing what type of areas the locals are fishing. Let’s say many of the permanent houses are spread out over a 30’ hole, surrounded by a shallow weed flat.  I will begin to search the lake map for other areas with similar traits. Chances are if you can find a similar spot with less fishing pressure, you may hit the jackpot.  It can be a huge advantage to work in a team with one angler walking ahead drilling, while the other follows with the Vexilar. Quickly driving up to each hole on the snowmobile and swinging the transducer in different directions will let you know if fish are present. If fish are seen when swinging the transducer, it will alert you to which direction to drill next. Once located, we drill holes closer together until we are right on top of the bio mass. Missing a school of fish by ten feet is like missing by a mile. The new Pro View Transducer from Vexilar has been a real game changer the past few seasons. It allows an angler to control the cone angle with the gain knob. The ability to search a larger area with fewer holes is a huge advantage and allows for more time scratching the itch. 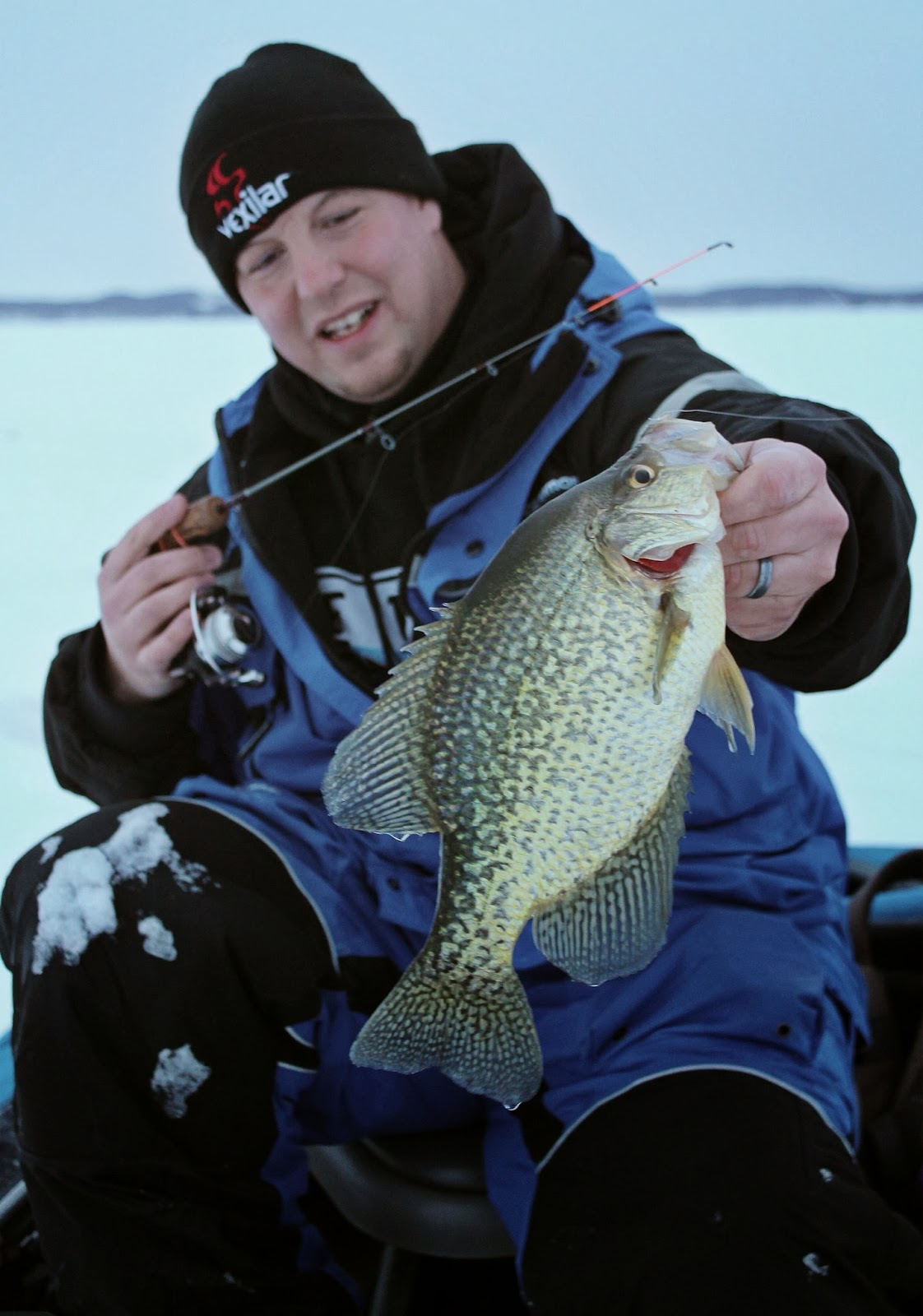 Be Shallow
Searching shallower than everyone else will often produce the largest panfish in a given water system. Panfish grow large because they are able to avoid predators, including anglers. Noise from anglers can push large panfish out of deep water and into heavy cover. Once in the weeds they will find the oxygen, food, and cover they need to thrive. The two factors that seem to draw fish are green healthy weeds and proximity to deep water. Coontail and curly leaf pondweed specifically will often stay green, even through the harshest fall weather. Hungry panfish will roam through the weed stocks, like a pack of lions, looking for that next easy meal. While pre-fishing for a tournament last winter, my wife and I stumbled on an interesting pattern. While most anglers drilled out deep basins looking for plankton feeders, we found huge bluegills gorging on Amphipods or freshwater shrimp on a large weed flat. Watching these fish with our underwater camera uncovered larger bluegills than we had ever encountered on this lake. We watched in fascination as these fish made their way through the weeds with ease, sucking shrimp off the stocks. Shallow water is where fishing fast really shines. Because fish aren’t as visible in shallow water on electronics, we briefly fish each hole we drill.  By drilling a large amount of holes we are assured to find the open patches, pathways and edges, which hold the largest numbers of fish. 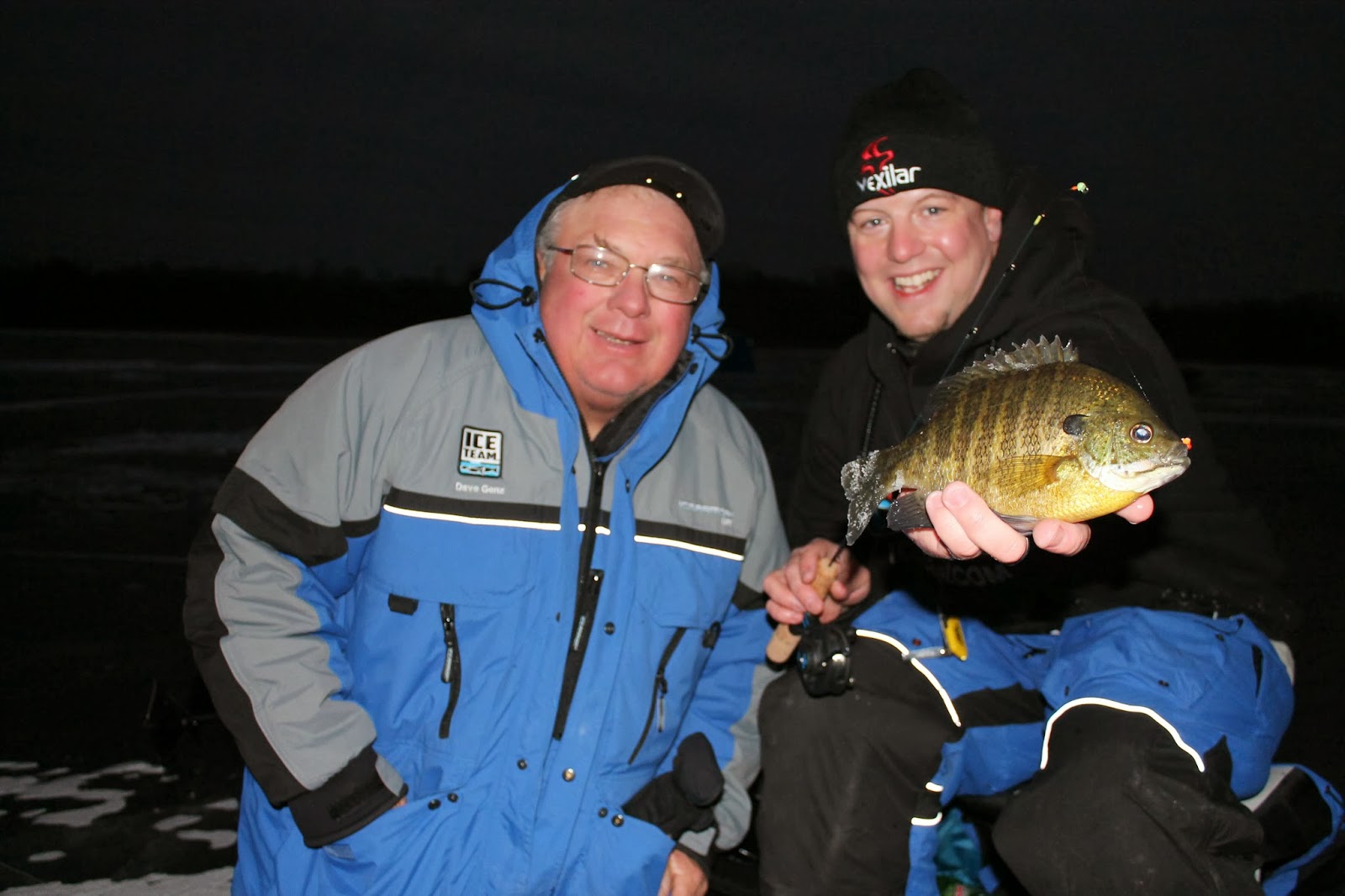 It’s a Slippery Slope
Steep drop off’s surrounding main lake structure can also hold large concentrations of fish. These areas hold food such as mayfly larva and dragonfly larva. While these food sources can be present in many different areas, the base of a steeply dropping slope will provide some of the highest concentrations. For years, panfish guru Dave Genz has talked about these sticky bottom areas. These areas house the correct type of substrate to allow larva to burrow.
It takes a certain type of angler to strike out away from the pack to uncover that next hot pattern, an angler with the fish itch. Once you get the itch, you may acquire a renewed passion for the hardwater season. It just may leave you dreaming for a late spring.