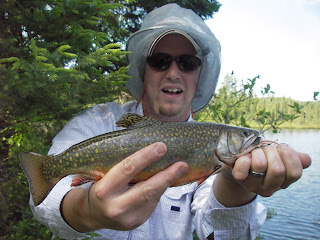 A secret society exists in the fishing community. A group of people so stealthy that most don't even realize they exist. They are back country trout anglers, and the first rule of back country trout anglers is: that there are no back country trout anglers. The only way that you spot these people is the fish slime on their Carhartt's you might notice in line at the local convenience store. Pair this with a fuel purchase and a few tubs of wax worms and you may have spotted a member of the fishing underground. These people don't show their faces at the local bait store in fear they might be asked "where they bitten". Your best chances of spotting a member of the underground is in the arrowhead region of Minnesota, because this is where the back country trout are bountiful. Their prey is of course the most regal of the trout family, the brook trout, but for most underground members the splake or rainbow trout will do in a pinch. Their day of reckoning is January 14th, the Minnesota winter trout opener.

For these anglers 16" fish are respected, 17" fish are coveted, and 19" fish... most people are lying about. In this elite group of anglers 4:30 am is considered an acceptable starting time. If a friend shows up late, you simply leave him behind. Holes are often drilled in a clover leaf formation to allow for viewing of your shallow water prey. When a big fish approaches the "berry pickers" or novice anglers often panic at the sight  and blow their opportunity. The true underground member however keeps a steady hand. Often working his jig with the precision of a puppet master.

Growing up on Minnesota's North Shore, trout opener fell right behind the opener of Wisconsin's Brule River and ahead of Christmas on the priority list. We went to lakes that you'd later lie to your mother about in fear she might name drop at the office water cooler. We went to places that had to be packed down with snowmobile to allow for gear to be hauled in. Places where we'd bring chainsaws to clear trail on the way in to allow travel. I've broke thru thin ice wading in bogs to reach otherwise inaccessible trout water. I've fished trout opener with sinus infections. I was once blindfolded and brought from Two Harbors 45 minutes to "lake x" to chase giant brookies as colorful as a kaleidoscope. If asked to go again I'd leave in a moments notice.

So why you ask do grown adults go to these measures to catch a fish. Is it the tradition of winter trout opener? Is it the allure of the unknown and what one may catch? Is it the adventure? Or maybe just a great time to get together with friends, talk smart and chase the elusive trout. Should you ever come into contact with a member of the fishing underground be sure to ask. As for me I digress, what fishing underground;) 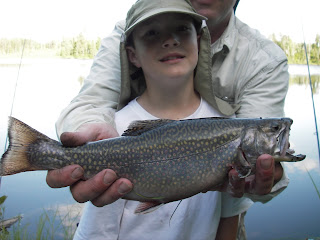