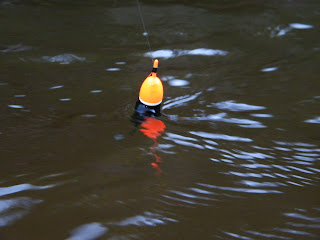 A properly rigged and weighted float can deliver your offering at the precise speed of the current, allowing you to achieve a perfect drag free drift.

I like to use floats from Raven Tackle that are specifically designed with steelhead fishing in mind. They attach with surgical tubing and don’t fray your line when you’re making adjustments to depth. They are also rated by a number that lets you know how much split shot they can hold. 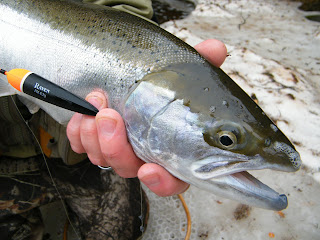 The first order of business is getting down to the bottom where the fish are. You want to space your split shot in such a way that the largest weight is on top to punch through the heavy surface current, and the smallest amount is near your offering. This is known as a shirt button split shot pattern. This allows your offering to float downstream ahead of the float at the same speed as the current. I start out by placing 4 BB split shot under the float and then taper down. I pinch these split shot on by hand to not damage the line when making adjustments to depth. 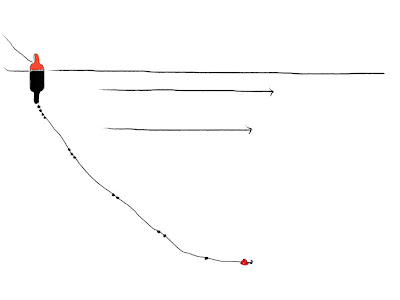 Start out shallow and slide everything up after a few drifts. This avoids drudging bottom and the possibility of spooking fish. The thing about sensitive floats is they will let you know where you are in the water column. If the float points downstream you are drudging bottom. If the float points upstream you are either set too shallow or you need more weight to match the current. What you want to see is the float straight up and down and submerged to the point that only the top is visible. This lets you know that everything is set up properly and you’re on your way to a feisty steelhead.

Hydrology tells us that the current in a river is actually faster on the surface than on the bottom. It doesn't take long for the steelhead to notice when something floating by them is awry. To slow the float down, we use a technique called "trotting" or pulling back on the float slightly during your drift. This allows you to slow the float to the same speed as the current on the bottom. 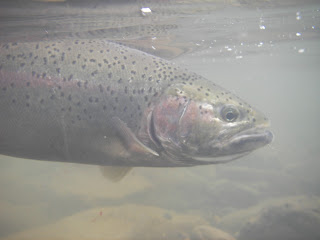 Presentation selection can vary. It can include such things as yarn tied to mimic a fish egg, stone and hex fly imitations, pink plastic worms, night crawlers, butter worms, wax worms and spawn. I've also had success with a local fly pattern known as a Lake Superior X-Leg. These are tied by a local company called Jeff's Jigs and are available online.

Get out and chase some of the hardest fighting, most beautiful fish that has to offer. Please remember to handle these wild fish with care.

Email ThisBlogThis!Share to TwitterShare to FacebookShare to Pinterest
Labels: how to float fish for steelhead, how to rig up for steelhead, migratory rainbow trout, north shore steelhead, steelhead fishing