Get Nocturnal for Big Cats 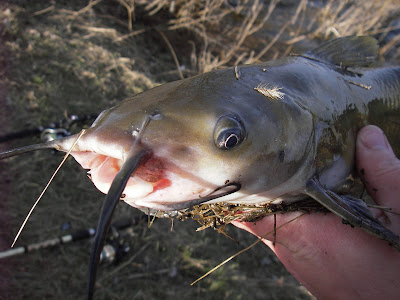 It may come as a surprise to a lot of my trout fishing buddies but one of my favorite species to pursue is the channel catfish. It’s not a fish I chase for table fare or for its photogenic appearance. I pursue channel cats because they really put up a fight! They also allow me the opportunity to get nocturnal and get away from the crowds to relax. There is something therapeutic about launching my boat under the moonlight and heading to one of my favorite holes on the river for a little cat fishing.
Channel cats are most active at night. They have a few traits that make them such efficient night time hunters. First, they are armed with a very high amount of olfactory receptors in their nostrils that give them an incredible sense of smell. They are also equipped with four pair of whiskers that are covered with taste buds. They are actually omnivores and will take a variety of baits. Savvy anglers however choose baits that appeal to their two strongest senses, their sense of smell and their external taste buds.
I’ve experimented with a variety of different bait choices that included commercially processed stink bait pellets, dead suckers, night crawlers and dip baits. My confidence bait however for late summer cats is the lowly chicken liver. A tub of chicken livers from your grocer’s meat department will last an evening of fishing. It will also create a scent slick in the water that will call cats in from long distances. We’ve set up one rod with night crawlers and the other with chicken livers and caught 5 fish to 1 on the chicken livers, on several different occasions. The hard part can be getting them to stay on the hook. We listen carefully after casts and if a second splash is heard we reel in and re-bait. 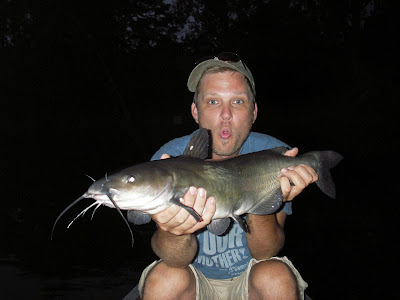 When fishing at night I like to keep my rigs as simple as possible to avoid tangles. It’s funny how we can go months without seeing a tangled line when fishing during the day but as soon as we step foot in the boat after sunset we inevitably have a rod tangled. A simple bottom fishing rig consisting of a large egg sinker and 18” of leader is all that is needed. Spool up with a fluorescent 20 pound test monofilament. Catfish have very hard mouths so I choose to ante up for the premium hooks that are chemically sharpened. I’ve taken my nieces and nephews out and had success on circle hooks but for me not being able to set the hook takes away from the experience. I prefer a 3/0 octopus style hook. Before putting the rod into the holders I attach a glow stick to my rod tip for visibility. I like the Cliplight from Starlite because it attaches directly to the rod tip without tape or awkward attachments that come off during casts. Many anglers will attach bells to their rod tips to signal strikes but I personally tend to lose them when casting.
At night channel cats are on the move feeding but you still want to position yourself in a high percentage area. My favorite spots are at the heads of holes. I try and set up where I can fish close to the drop off where the swifter water stops. Other traditional spots to look for include wing dams, fallen trees and other major current breaks. Channel cats will hunker down in deeper holes during the day and come up shallow to feed at night. Two rod holders off the back of the boat will allow you to anchor off the bow and keep lines tight to signal strikes. Shore fishing is also a great option in many areas. Anglers use sand spike rod holders to hold rods in place as they refresh baits and tend to the fire. 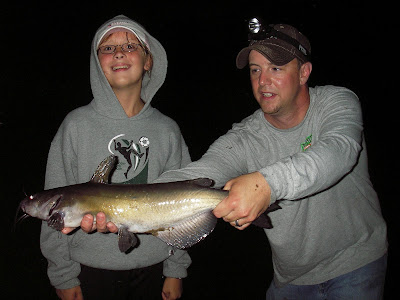 While a ten pound fish is very respectable, bigger specimens are possible. Trophy caliber channel cats of 20 plus pounds are landed every year. The biggest specimen ever caught was 58 pounds taken from the Santee Cooper Reservoir in .
Contrary to popular belief the whiskers of a catfish are completely harmless and will not sting you. When handling cats the part you want to avoid is the sharp spines on the pectoral and dorsal fins. I usually grab catfish by the tail and place my other hand under the belly to support the fish.
Get out and chase channel cats whenever you get the opportunity. I used to fish cats with a guy that claimed his biggest fish always came when the barometer was falling. I would get late night phone calls claiming that the big cats were going to be “on” and to grab my gear. Some nights they were and others not, so the jury is still out on this theory. Make a stop at the grocery store for some chicken livers and get nocturnal for big cats!
By: Garett Svir
Photography: Kim Svir