Bluegills Secrets Reveled
By: Garett Svir
Photography: Kim Svir
It’s 5 am and you’re up brewing coffee. Lake map in hand you make last minute decisions before heading out to load gear. Mother Nature’s icy grip has taken hold as you head out to temperatures well below freezing. Armed with an assortment of jigs and plastics you make your way out into the frozen tundra. Big bluegills can do crazy things to a person. They can consume your thoughts. If this sounds like a normal weekend to you, then you just may have what it takes to ice a bluegill over 10” this winter. Big bluegills can be tough customers. The best eye sight in the business coupled with an uncanny way of tasting a bait before committing can make them very difficult at times. When it comes to winter bluegills it seems like 10 % of anglers are hooking 90% of the fish. So what are their secrets? I decided to pick the brains of two of the best in the business… Dave Genz and Dave Young. 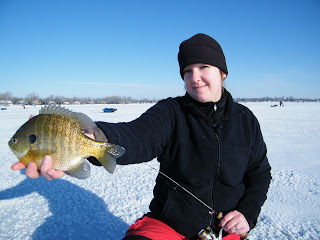 Dave Genz is considered the founding father of modern ice fishing. The winter fishing system that he developed has forever changed the way that anglers ice fish. Instead of dragging a small house out onto the ice to stay comfortable, we can now stay out of the elements and remain mobile with the advent of his Fish Trap. His inventions were born out of necessity on his quest to catch more and bigger bluegills.
Genz fishes more by feel than by line watching. It is something that he refers to as cadence. “It’s just like fishing with a crank bait, you want the fish to feel it in their lateral line” says Genz.  He has learned to feel his jig pounding in the water. When he can no longer feel the jig pounding he sets the hook knowing that a fish has inhaled his offering. He prefers clear line in 2 pound test over the high visibility stuff. Genz expressed that sometimes a person has to cut the bluegills a little slack. He informed me that when the bite gets tough and you find yourself missing fish to briefly drop the rod tip and immediately set the hook. This is something that he learned by years of bobber fishing. “Sometimes you have to let them take it” explains Genz. When he started using Vexilar 25 years ago he used to write articles about how to catch sniffers, those picky fish that would not bite. He wrote about finesse presentations and dropper rigs. He has now changed his school of thought regarding this and opts to drill more holes and search out active bitters. “I want to make that first drop down a new hole” he explains. He firmly believes that those first drops down a new hole produce his biggest bluegills of the season. “At the end of the day that strategy will produce more fish” says Genz. You want to have the mindset that a small percentage of the fish in a particular body of water are bitters, and that it’s the anglers job to search out those bitters. When asked about structure he expressed that his favorite spots for bluegills are deep weed edges. He prefers to search these areas over deep basins because he can usually find less pressured fish. “Deep basin areas can be good early before the crowd develops” he explains. Once the crowds hit an area, it is beneficial to strike off to find less pressured fish. 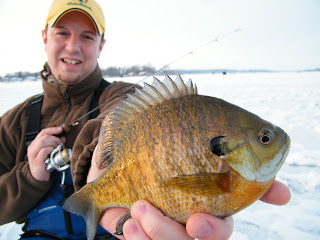 You may remember Dave Young from the television reality series Ice Men that aired on the Versus Channel. Young is considered an authority on tight line fishing for finicky bluegills. Spending 35 years on the hard water, Young has also seen it all. He knows how to get it done in tough conditions. Young has spent countless hours showing others the art of tight lining. When he is teaching someone to tight line, he does not let his students use a flasher. He believes that this can be a distraction for anglers new to this style of fishing. “An angler must first learn to watch their line and detect subtle strikes” he explains. This also forces new anglers to fish the entire water column and they will often catch fish that come in quickly from outside the cone angle of the flasher. The amount of concentration that Young employs is unmatched. He jokes of bringing Advil with him on tournament day because he gets headaches from concentrating too much on his line. If you watch Young with a jigging rod it almost looks like he is jigging in a circle. When questioned Young stated, “A jigging style is like a finger print and is unique to every angler.” You can still believe that I am going to add circle jigging to my bag of tricks this winter. “I am watching my line as far down into the water as I can see it” tells Young. This allows him to see even the slightest irregularities in his jigging sequence. He’s watching the small kinks in his line that appear while jigging. If he notices the kinks in his line straighten out, he sets the hook. He is also looking for his line to go slack. This alerts him that a fish has grabbed his bait and swam up in the water column. His line of choice is 2 pound test Stren in high visibility yellow. He likes the way yellow shows up against snow and ice. He developed an ice rod for HT and pairs it with a small plastic reel called a Schoolie. On tournament day, 28 rigged rods will make it onto the ice. This allows Young to switch presentations quickly without taking the time to re-tie. Throughout the interview he stressed the importance of versatility. “Some times I work fish from the top down and other times I work them from the bottom up” he explained. 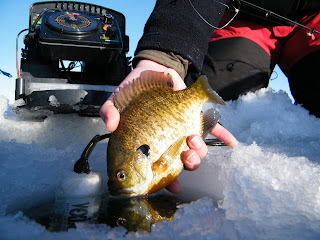 The play book is open. The best in the business have revealed tactics to help you ice more bluegills this winter. I hope that some of those bluegills make it back down the hole. I recently learned of an organization called Recycled Fish. They are encouraging anglers to release their largest bluegills to keep big fish genetics in our favorite lakes and ensure big fish in the future.  Become more than a sportsman, become a steward of our lakes and take the sportsman’s stewardship pledge at http://www.recycledfish.org. 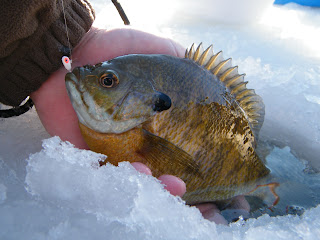