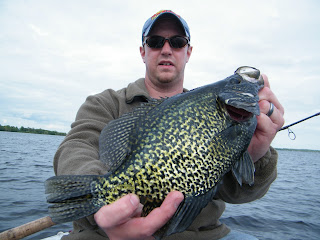 The ice season has come to an end but don’t throw out the larva or put away the ice fishing jigs quite yet. You might find success using winter strategies for spring success. After ice out, crappies will start to make their way from the deep water haunts of winter to shallow black bottom bays. It’s not spawning time. These fish are searching for the buffet line. Black bottom bays soak up the heat of the sun like a sponge and hold bug hatches necessary to start the food chain. Crappies sneak in on warm days for a quick meal long before the spawn begins. While minnows are a great producer once water temperatures have warmed, ice out slabs require finesse presentations. I think the experiment stemmed from my unpreparedness for the coming season. Winter jig boxes and larva somehow made their way into the boat one spring morning. Now I never leave them behind and don’t think you will want to either. 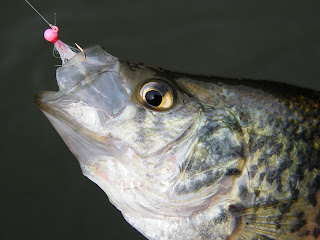 Predictable locations make searching for crappies at ice out fairly basic. Bays located on the northern end of lakes warm up first and see the first signs of life. Feeder creeks can also hold insect life and draw in crappies for a quick bite. Soft bottom shorelines on the northern end of lakes are also areas worth exploring. Look for anything that will transfer heat into the water like tree branches, cattails or wood dock pillars. We pay close attention to the temperature reading on the graph when scoping out areas. It’s amazing what a difference a few degrees make to crappies this time of year. On one outing last year after searching out several bays we learned an important lesson in temperature. The first bay we fished was void of fish. Normally, after striking out, we would start to search different types of areas and abandon black bottom bays altogether. On this particular day, we decided to check out a similar bay in the other basin of the lake. We headed to some overhanging tree branches in the far back section and were greeted with a water temperature 3 degrees higher than in the first bay. We found crappies stacked up against tree limbs and when we didn’t get snagged, we hooked fish. Just that small change in temperature made all the difference. Another important lesson we learned was that while It’s easy to overlook the really snag infested areas; these areas often hold some of the largest specimens. Looking through old fishing log books, I also uncovered that many of my biggest crappies have been caught right after ice out, long before the spawn.


Stealth is equally as important in the spring as during late ice. We use the electric motor to slip into bays and deploy the anchor quietly. Excess commotion will push shallow water slabs deeper into unreachable cover. Cold fronts may also push fish deep into heavy cover or into the deepest part of bays. Fronts will sometimes push fish out of bays altogether but don’t fret because they seldom go far. The first break line outside of the bay will offer crappies the security they need to wait out a front. Once the weather stabilizes, fish will make their way back to the buffet line. 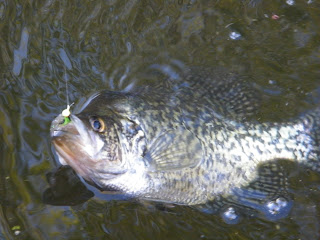 Float fishing brings out the kid in all of us. If your childhood was anything like mine, many hours were devoted to watching a float and patiently waiting for it to slip beneath the water’s surface. My level of excitement hasn’t changed much since those early days. I still love the anticipation of float fishing. Ice out crappie fishing is a great opportunity to release that inner child. The round bobbers of your childhood may lead to light strikes going unnoticed but adult versions do exist. I started using small clear floats that attach with surgical tubing. My favorite is the 2.4 gram Drennan Crystal Loafer. These floats are used by tournament anglers in the UK because of their incredible sensitivity. These floats can be perfectly weighted to achieve neutral buoyance. The goal is to have enough weight so only the orange top of the float is above water. If a crappie as much as thinks about sampling your offering, these floats will alert you. Crappies are still biting just as light as when you left them a few weeks ago during late ice. Many anglers abandon small presentations at ice out and go straight to large bobbers and minnows while anglers in the know stick with cold water presentations. 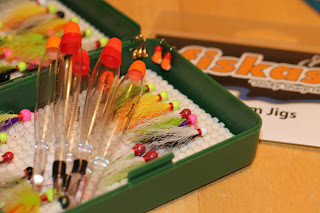 Jigs for early season success should be small. Some of my favorites are the 3 mm tungsten jigs from Fiskas. They cast with ease and weight floats to that sensitive level of neutral buoyancy. I also like the 2.5 mm Hole-In Jig from Fiskas. I tend to tip these with micro plastics and use a slow retrieve to swim them back to the boat. Hole-In Jigs, by design, stay perfectly horizontal without having to position knots. The poor crappies don’t have a chance. Some other stealthy options include 1/64th oz calf tail jigs. Calf tail jigs take on a life of their own under water. They can be tipped with a single wax worm and fished in a stationary manner or worked back to the boat without bait. Experience has taught me that cold water crappies prefer a smooth gliding motion over jerky up and down movements. Experiment with float depth and speed of retrieve until you crack the code.


It feels great to be back in the boat, feeling the heat from the spring sun, but before you race to put away your ice fishing gear give winter strategies a try. It’s a great technique to tempt cold water slabs and make you a more versatile angler.