This time of year is always bitter sweet for me. It's that time of year when I realize that my winter fishing season is over. I'm going to let you in on a secret that will help you with your winter fishing withdrawals. It won't cost more than a few bucks in gas and a tub of wax worms. It's the incredible fishery that exists on the shorelines of Minnesota's Lake Superior. Early March is the time that Lake Superior Kamloops Rainbows begin to stage off river mouths in anticipation for their spring spawning migration. It's a time of year when these large Great Lakes fish are within casting distance from shore and can make for a memorable outing. The best part is a big boat or charter is not needed and this can all be done with equipment you currently own. 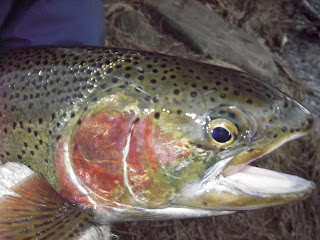 Many areas from Duluth to the Canadian border can produce fish but I prefer areas that are in close proximity to warm water discharges or river mouths. These areas with warmer water are going to offer food and attract fish. Steelhead and Kamloops always return to spawn in their birth stream and spend the months of February and March seeking out these streams. This makes them susceptible to a wide variety of offerings from a savoy angler. 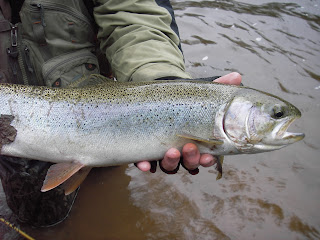 As for equipment I like to use long light action rods. The long rod allows for greater casting distance. It also allows you to fight large fish on light line by fighting them on the rod rather than the line. Simply keeping your rod tip up will absorb alot of the shock from the powerful runs these fish make. Just don't make the mistake of pointing your rod at the fish or all shock is taken by the line. A reel with a good ball bearing drag system will also help bring these fish to hand. For line I like an abrasion resistant 6 pd test. This keeps my line from getting nicked up on the many boulders that line Lake Superiors shoreline, but is not visible in the clear water. 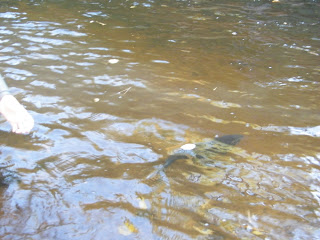 The two main techniques used are bobber fishing and plunking. A variety of weighted bobbers are available that allow you to get enough distance to get out past the shoreline rocks. A leader of 18-30" is then added. On the business end a special jig tied with rubber legs and a marabou tail known locally as a "looper bug" is the bait of choice. I've also used small bead head flies, night crawlers, wax worms and fresh spawn tied into mesh bags.

The second method is much like a walleye rig. It starts by adding a sliding sinker followed by a bead and then a high quality barrel swivel is tied onto the line. A leader of 16-25" of fluorocarbon is then tied on, followed by a #6 hook. This rig is tipped with a night crawler filled full of air from a worm blower or a mesh sack filled with spawn and a marshmallow. This rig is cast out and the slack line reeled up. The bait floats up off bottom and the line slides freely through the sinker on bottom. It is placed into a rod holder and watched closely for bites. Bites can range from violent strikes ripping line to something as simple as the line going slack. I have made a few sand spike rod holders by taping a chuck of PVC pipe onto a piece of re-rod. This can be driven into the sand and holds up to even the most violent strikes from passing Kamloops Rainbows.

The Kamloops Rainbows of Lake Superior are stocked by the Minnesota Department of Natural Resources. These fish can be identified by a clipped adipose fin. Any fish that has an adipose fin is a wild steelhead and must be immediately released. If you do hook into a wild fish be sure to not over handle the fish. These fish should only be handled briefly for a photograph. Keep them in the water at all times. Wet hands before handling to not rub the protective slime coat off the fish. If this slime coat is damaged the fish is susceptible to infection. The steelhead of Lake Superior were in danger during the 1990's. The fish are starting to rebound due to responsible angler handling and a strict catch and release policy adopted by the Minnesota DNR. Should you catch one please do your part to protect this great fish.

Fill the void left over from the ice fishing season with a trip to Lake Superior for Kamloops Rainbow Trout. These fish make drag burning runs often leaping a few feet out of the water once hooked. You will not be disappointed. Who knows you may become "hooked" yourself!